Review of the Leatherman Surge Multitool


My first impression of the Leatherman Surge was that it was solid and well constructed. The model I was shipped to review came with an all leather sheath and 2 spare interchangeable blades (more on that later). Out of the box, the tool was hefty and a little sluggish to open and close. I knew how to fix that though.

A quick boiling bath in my pot, followed by a good wipe down and a quick application of WD40 and the Leatherman Surge is ready to use. Each tool now opens and closes readily. I began inspecting each tool to assess its form and function.

First the pliers. The needlenose pliers are strong with an aggressive grip pattern. The 'regular' pliers have a decent sized opening and even deeper-gripping grooves than the needlenose. At the base of the plier tools are three sets of wire cutters: standard, hard wire, and stranded wire cutters. There is also an electrical crimper. At this point of the review, I feel they are all sufficient for the tasks they were designed for. 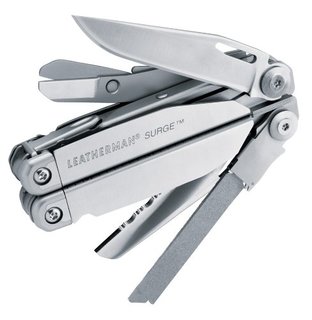 Next, I inspected the knife blades. The straight edge blade is a drop-point shape in 420c steel. The tip is plenty sharp, as was the blade itself with just the factory sharpening. The serrated blade is a sheepshead-shaped blade, also in 420c steel. I like the sheepshead, as it allows for some additional safety in close quarters cutting (for example cutting a seatbelt to extract someone from a car wreck). The locking mechanism for both knife blades, as well as all the 'opening tools' was sturdy and strong. I am disappointed however that Leatherman has not opted for a better steel on the blades such as 154cm or S30v which they offer on some of their other tools, but I am a knife person, so take that wish as you will. 420c steel will cut nearly everything you need it to, you may just have to sharpen more often.

Moving on to the blade exchanger with the saw, spare saw blade, and the diamond file. The mechanism for changing the blades is well-constructed, yet very secure. I was impressed by the sharpness and aggressive cutting pattern of the saw blades and the file is a nice touch. With a wood/metal file on one side and a diamond file on the other, it allows you to sharpen other hand tools, or in a pinch, even sharpen the straight knife blade of the Surge (but not while the file is in the blade exchanger). I was concernedI would lose the spare blades, but a quick check of the sheath showed me what I had hoped for... A little side pocket inside to store the spares together with the tool.

I decided to look at the screwdrivers next. The large bit driver is featured on many of the Leatherman full-sized tools. The Surge comes with a single bit for the large driver, Phillips on one side, standard flat on the other? The fact that you can interchange between any of the Leatherman large bits you may have from other tools or the bit driver set (a separate purchase), makes this bit driver very versatile. The small bit driver is small enough to repair eyeglasses. I don't see much other use than that, unless you are working with small remote control vehicles or computer accessories with micro screws. Both bit drivers hold on to the bits snugly, so I was satisfied it would be hard to lose a bit from it just falling out. Finally, is the dedicated flathead screwdriver. It is solid, and wide, a nice compliment to the skinny and narrow flathead on the included bit for the large bit driver.

Lastly, a look at the remaining tools. There is an awl with a thread loop. This tool is very solid, yet sharp and looks like it would readily punch through some thick leather (more on this later). The bottle opener/can opener/wire stripper is a clever use of space, being combined into a single opening blade. The ruler measured a true 9 inches, and it was time to begin some real world testing.

I began by opening another Leatherman tool that arrived in a clam-pack (hard plastic packaging materials, designed to prevent theft in retail stores, but very difficult to open). The straight blade easily punctured and then opened one side of the package, then I switched to the other side with the serrated edge. It was harder to pierce the packaging with the sheepshead-shaped blade, but once inside, the packaging just 'zipped' open. Next, I pulled out some of my retired rappelling gear and located a length of 11mm static rope, and a retired piece of webbing. With moderate pressure and a little effort, the straight blade was able to cut through both materials. The serrated blade performed better, as I had expected in this test, easily cutting both materials.

Over to the workbench to cut some wire. The Leatherman Surge easily cut through a variety of stranded and hard wires from thin speaker wires, to thick stranded lipo battery wires, to large gauge household copper wiring. The crimper and wire stripper performed as expected as well.

Pulling out my somewhat old and dull camp axe, I positioned the wood/metal/diamond file in the blade exchanger and went to work. It took a lot of strokes to get the axe to the sharpness I desired, but that was due to the length of the file, not the quality of the tool or cut pattern. Switching back to the saw blade in the Surge's blade exchanger, I stepped out front and made quick work of some 1.5 inch thick branches in the front yard. Once again, many strokes, but the cutting pattern was aggressive and sawdust was flying.

Screws, screws, and more screws... How do you review screwdrivers? Well, I grabbed a random handful of screws (old and new) from my junk drawer and started driving them into a spare 2x4 I had lying around. The large bit driver and large flathead driver were able to drive all the screws I had in my drawer relatively easily, but I did notice a little wear on the Phillips large bit after this experiment. I don't know yet if it was stripping out or just some of the black oxide finish was coming off. The small bit driver tightened my eyeglasses up nicely with no issues.

I went inside to grab some leather and returned with some buckskin and some thick latigo leather. The buckskin was no match whatsoever for the awl, as it poked through repeatedly. I was pleasantly surprised with the ease the awl punctured the latigo as well. The grip from the tool, and perhaps the weight of the tool itself helped make a tough task fairly easy.

I opened a can of dog food with the can opener with no problem, so there was just one tool left to test: the bottle opener. I grabbed an adult beverage from my refrigerator, slowly applied the bottle opener to the cap, and POP! Success!

I performed one final test, a 'carry test'. I put the tool on with my other hiking gear, and trekked 10 miles each of two consecutive days. The purpose of this test, was to determine what scenarios I would carry the Surge on a regular basis.

Construction: 4.5 stars out of 5
This tool is very well put together, very solid and functional. Better steel for the two knife blades would shift this to 5/5. The Leatherman workmanship exceeds many of the other Multitool makers.
Ease of Use: 4.5 stars out of 5
The tool was a little hard to work at first, but once lubricated properly, it was very easy to use. I don't see the initial stiffness itself as a detractor, but for those buyers without the knowledge or handy WD49, the tool is initially harder to use.

Functionality: 5 stars out of 5
This tool has the best 'toolbox' replacement assortment of tools I havebeen able to use or review to date.
Value: 5 stars out of 5
With the Leatherman Surge, you certainly get what you pay for. With 21 tools in a 15 ounce package that you can put on your hip and a 25 year factory warranty, you can't go wrong.

I would leave the Surge in my glove box for emergency repairs roadside and emergency seatbelt extractions.
I would leave the surge in my hunting pack, provided I was doing single day hunts.
I do carry the Surge in my fishing bag now.
And I do keep the Leatherman Surge on my dresser or home office desk so I don't have to run to the garage all the time for my big, heavy toolbox.
I do highly recommend the Leatherman Surge to anyone looking for an excellent full-sized Multitool.

Mr. Rock is an avid hunter, fisherman, backpacker, camper, and general outdoorsman. He is an American Red Cross certified First Aid/CPR instructor, as well as a Cub Scout Pack Committee Chairperson. He grew up in the woods of Western Pennsylvania and now spends his evenings and weekends teaching his son and the other scouts all about camping, survival, fire-making, and general outdoors skills. He can be contacted at AlanRockSr@gmail.com

Did I mention that this was an excellent write up?!