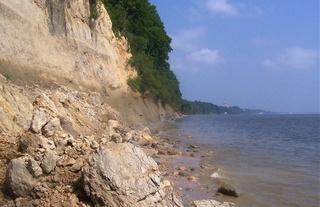 
My first impression of the LD01, was that the LD01 was light, yet had high quality construction. The Fenix LD01 R4 is packaged with a pocket clip, spare O-ring, a 3/8 inch split ring, and a Duracell battery. The battery seated easily in the flashlight and the clip was easy to attach. I weighed the flashlight fully assembled and it was just under one ounce. So far, it was meeting my expectations for a micro flashlight: quality construction, easy to begin using, and light. 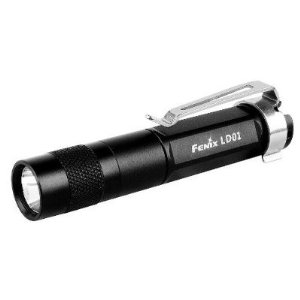 Now to begin checking out the functions. A simple turn of the end cap brought the flashlight to life. I intentionally did not read the instruction manual, as I wanted to determine how intuitive the functional design of the flashlight would be. At first, I could not figure out how to cycle between the different modes, but a quick review of the entire flashlight showed me the only moving part was the end cap, so a quick turn off and back on indeed changed the mode. After playing with the flashlight for a few minutes, I determined the pattern to begin at medium intensity, followed by low, and then moving to high. While I personally will use medium most, so starting there is very convenient, I think it would be more intuitive to start with low and progress to medium, then high.

With the functions sorted out, now was the time to figure out how to carry the Fenix LD01 R4 in the field. The included clip mounted securely and provides for a great pocket carry option or probably even mounted to the bill of a baseball cap. I already have an every day carry (EDC) knife that I keep in my pocket, so I decided to utilize the lanyard loop built into the aircraft aluminum body of the LD01. I attached the included split ring and quickly made a para cord lanyard and hung the flashlight around my neck.

Off we go! I hiked a few miles down to the beach with my son, fossil hunted for a few hours, and hiked back to our campsite while it was still daylight. I completely forgot I was carrying the LD01, it was light and snug against my chest with the lanyard. I imagine, it would be just as convenient pocket-mounted with the clip. As night began to settle in, I began using the flashlight for its intended purpose: lighting the path before me.

It was a fairly dark evening, under heavy cloud cover that opened into severe thunderstorms (more on that later), so it was nice having a flashlight since the paths were not familiar to me (first time at this campsite). I found in the more open areas, I could turn on the LD01 to low and allow it to swing freely from my neck lanyard, giving me plenty of light on the trail. This method not only saved on the battery, but also allowed me to retain much of my night vision. When the trails closed in a bit, I used the same method with the LD01 on medium intensity. The trails lit up well, and were easy to follow. I had to invent a need for the high intensity beam, so I went searching for animals. This little 1-ounce light was throwing a surprisingly powerful beam across open fields and lighting up the groves of trees. I found a raccoon and was able to clearly see eye-shine from about 75 yards.

Lightning, thunder, and torrential downpours ended the animal spotting adventure, so we retreated back to shelter. The Fenix LD01 on low intensity is perfect for reading books in the tent. The letters were crisp and clearly visible and the reflected light off the pages didn't bother my eyes at all. With no end in sight for the storm, I decided to test the waterproof qualities and battery longevity simultaneously. I took out a brand new Duracell AAA battery and installed it. I visually inspected the O-ring at the same time and all was in order. I turned on the LD01, cycled it to high intensity, and dropped it in a cup of water in the rain. I then started my stop watch.

One hour and thirty seven minutes later, the flashlight shut off. There was no gradual dimming of the light, just a quick flicker or two, then out. That's good, because it was time for us to sleep anyway.

In the morning, I plucked the flashlight out of the water, dried the outside, opened it, and installed the original battery back inside. A quick turn of the end cap and the Fenix was alive again. Cycled through all three modes and the flashlight worked as expected! 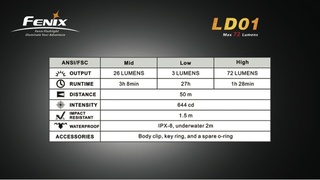 Here are the factory-published run times for the LD01:
Here are my ratings of the Fenix LD01 R4 micro flashlight (as compared to other micro flashlights):
Construction: 5 stars out of 5
To be so light, yet so well constructed, it deserves a 5.

Intuitiveness: 4 stars out of 5
The cycle order of M/L/H may be confusing to some, as was the method for changing between intensity levels. To be fair, the manual did explain everything clearly when I read it afterwards.

Brightness: 4.5 stars out of 5
There was an LD01 made with a Cree Q5 bulb which put off 80 lumens, but at a cost of nearly 1/3 the runtime on high.
Versatility: 4 stars out of 5
The 3 cycles are very convenient, but I felt the lack of a distress signal, whether a simple strobe or a true SOS flash, detracted from the overall versatility of the flashlight.

Value: 4.5 stars out of 5
While the price tag for the Fenix LD01 is higher than say a Maglite Solitaire, the form, features, and functionality of the Fenix are far superior.

In the end, the Fenix LD01 R4 exceeded my expectations. I am so impressed that I have a new EDC item on my keychain... The Fenix LD01!
Mr. Rock is an avid hunter, fisherman, backpacker, camper, and general outdoorsman. He is an American Red Cross certified First Aid/CPR instructor, as well as a Cub Scout Pack Committee Chairperson. He grew up in the woods of Western Pennsylvania and now spends his evenings and weekends teaching his son and the other scouts all about camping, survival, fire-making, and general outdoors skills. He can be contacted at AlanRockSr@gmail.com